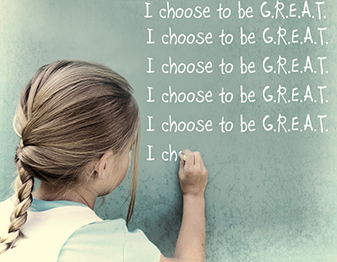 The Phoenix, Arizona, Police Department (PD), along with local educators and community leaders, received federal funds appropriated from Congress to the Bureau of Alcohol, Tobacco and Firearms (ATF) for the development and implementation of a school-based, gang prevention pilot program. The program was designed to reduce gang activity by having law enforcement personnel teach life skills to middle school students to help them resist the pressure to join gangs. This thinking led the Phoenix PD to the development of the Gang Resistance Education And Training (G.R.E.A.T.) Program in 1991.

In April 1992, ATF and the Phoenix PD entered into a cooperative agreement to facilitate the national expansion of the G.R.E.A.T. Program. In August 1992, the Federal Law Enforcement Training Center (FLETC) joined ATF and the Phoenix PD to expand the Program nationally, providing the programmatic support required to train G.R.E.A.T. instructors. G.R.E.A.T. expanded with surprising speed over the next few years.

By 1995, the Program had trained 1,859 law enforcement officers and taught more than 500,000 middle school students. That same year, the University of Nebraska Omaha began an in-depth, 5-year longitudinal evaluation of the Program. The study showed significant positive effects for students completing the training but did not clearly demonstrate that the Program was meeting its goals for reductions in gang joining. This led program leadership to take a hard look at what was needed to improve effectiveness.

In 1998, the Program added the Orange County, Florida, Sheriff’s Office; Philadelphia, Pennsylvania, Police Department; La Crosse, Wisconsin, Police Department; and Portland, Oregon, Police Bureau to the Phoenix PD to assist in administering the Program and serve as Regional Training Centers. This regional lineup remained the same until 2009, when it was changed to the current Regional Training Centers alignment.

During 1999–2000, G.R.E.A.T. underwent an extensive multidisciplinary program and curriculum review. The objective was to ensure program adherence to the latest scientifically supported data regarding prevention and educational research and theory. The new curriculum was successfully piloted in 14 cities nationwide in 2001 and universally implemented beginning in 2003.

In 2004, administration and oversight of the G.R.E.A.T. Program was transferred from ATF to the U.S. Department of Justice, Office of Justice Programs, which assigned operational control to the Bureau of Justice Assistance (BJA). BJA awarded a grant to the Institute for Intergovernmental Research (IIR) to provide national training coordination services and related tasks. ATF and FLETC continued to work closely with BJA and IIR and to participate in the administration of the Program.

In 2006, a second evaluation was commissioned to assess the redesigned curriculum implemented in 2003 to determine whether the changes increased Program effectiveness. To read about the results of the national evaluation of the G.R.E.A.T. Program, click the link Evaluation of G.R.E.A.T.

In 2009, the Bureau of International Narcotics and Law Enforcement Affairs, U.S. Department of State, partnered with G.R.E.A.T. to introduce the G.R.E.A.T. Program in Central America. The region is plagued by an epidemic of gang growth that has become transnational in scope, influenced by strong migration, deportation, and repatriation patterns that make this a shared problem with the United States. The Program has spread rapidly throughout Central America, adding an eagerly received prevention component to anti-gang efforts in the region.

In 2011, the Office of Juvenile Justice and Delinquency Prevention (OJJDP) became an active partner in the G.R.E.A.T. national effort, assuming from BJA the responsibility for providing the funds needed to support the training of G.R.E.A.T. instructors and provide up-to-date materials to instructors and students.

The Evolution of G.R.E.A.T. 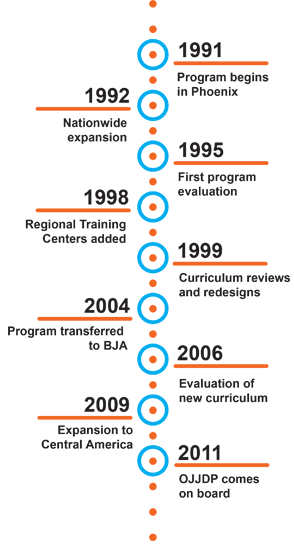